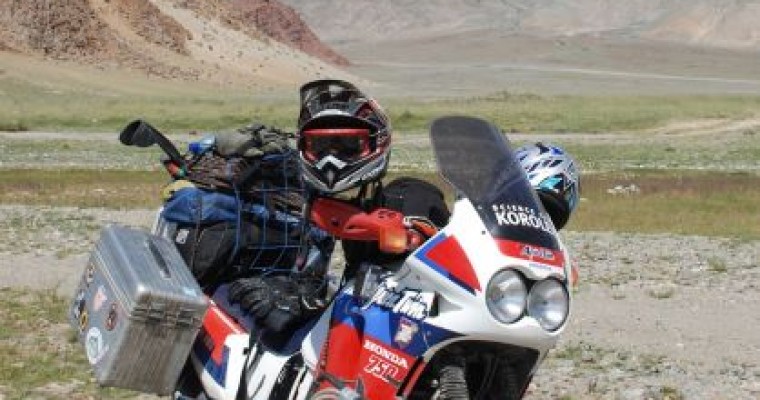 There is no doubt about it that the Africa Twin from Honda is one of the coolest Adventure/Dual-Sport bikes around.
Inspired by the desert racers that would dominate the Paris-Dakar Rally, Honda set to work on designing a bike that would pay homage to those racers.
While at the same time making a dual-sport accessible for riders who wanted to take on some smaller adventures.

The Africa Twin has seen four generations each with different engine capacities the first being the XRV650 and the latest being the CRF1100L which holds the reins today.

Africa Twin Background: Why is it called an Africa Twin?

Honda was having an amazing amount of success with the NXR750 which had won the Dakar Rally four times in a row. They had put Dual-Sport motorcycles on the map and Honda was leading the trail.
Using the 1986 NXR750 for inspiration, Honda went back to the drawing board and essentially built a replica of the Dakar model for the street.
It was released in 1988 as the XRV650 Africa Twin, before the 2004 BMW GS, which has since evolved into an Adventure bike we see every day, there was the on/off road ready Honda.
Honda weren’t quite prepared for the success of the XRV650, the bike caused a media sensation, and the public couldn’t get enough of the new model.
It had been built to be as close to the NXR as possible with all the features that made it a success in the Rally:

The XRV650 was not officially exported to the UK and Ireland, although models have since been imported.
By 1990 Honda released the successor in the form of the bigger 1990 XRV750 and this would see 3 generations right up until 2000. The outstanding testimony to the durability of the XRV750, is that many are still being used as everyday transport. Its successor came in 2016, in form of the CRF1000L Africa Twin.

The XRV650 Africa Twin was very popular upon its release largely thanks to how it so closely resembled the NXR750 used in the Dakar rally.
It was built in the HRC factory (Honda Racing Corporation’s facility) and every detail had the utmost attention paid to it.

For 1990 the XRV750 (RD 03) replaced the model and it had moved out of the HRC facility to be produced on a much bigger scale to keep up with demand.
Arguably, the XRV750 in its first iteration was not built to the same standards as the 650 model and this caused some frustration to owners.
However, that is not to say it was a bad bike, far from it and the proof is in the eating, given it remained available for 10 years after its release.

The engine on the XRV650 was a punchy V-Twin, offering plenty of torque and power to get you where you're going whether on or off road.

The V-twin engine growls as you punch through the gears to get up to speed.

The clutch is operated with a bit of a clunk, but that’s not a bad thing so you know where you are in the gearing.

There is plenty of low-down grunt for tackling muddy hills and then mid-range for when you want to hit the sand dunes or speed bumps if you don’t fancy desert racing.

With a top speed of just over 100mph the 650 is more than capable of sitting at motorway speeds, although those pesky V-twin vibrations can be felt at higher speeds.

You are on a dual-sport so taking the back roads is more fun anyway right?

The XRV750 saw a boost in engine capacity to 742cc with increased bore x stroke.

This engine performance was a major positive for the new model and made it a fan favourite, the engine would remain largely untouched throughout the model’s lifespan.

Some of the engine vibrations at the top end were addressed; but largely like the 650, the low-end and mid-range power is where the XRV750 thrived and kept owners happy on all terrain.

The engine and power capacity are definitely part of the reason why even today the older Africa Twins are just as capable to keep up with modern day dual-sports and adventure machines.

The XRV650 was built to high specs based off the Rally NXR and so the chassis was rigid, handling precise, suspension had plenty of travel and it wasn’t over the top heavy.

At 185kg dry, the XRV650 weighed in about the same as any street/sports bike so despite its large stature and off-road accessories like a sump guard, it was a reasonable weight that most should be able to manage.

Showa front forks   and the monoshock rear suspension setup was more than adequate to take on off-road terrain.

The XRV750 had upgraded Showa suspension and weighed in a little more at 207kg.

Both models handle well, steering is precise and intuitive, it isn’t as light as more modern machines but there is something about the clunkiness that is reassuring on terrain that is a little rough.

Ergonomically the riding position is natural and comfortable, putting you in full control of the machine with excellent visibility.

The Africa Twin is built for spending many hours in the saddle so on both the XRV650 and 750 you should find it comfortable to ride for many miles.

You sit into the bike, and it gives you very much a feeling of being at one with the bike.

The seat is wide and plush, it allows you to move around, although by modern standards it is a narrower bike compared to current Dual-Sport machines.

Being a dual-sport if you have the inclination to stand up to help with manoeuvring the bike, then the Africa Twin makes that process as easy as possible.

The single disc brakes on the XRV650 were a little weak and by today's standards would be considered slow reacting.

For the XVR750, dual discs (left brake disc & right brake disc) were placed on the front and this provided more than appropriate stopping power for the power output.
This upgrade was welcomed by many especially for when riding in adverse weather and off-road.

An average rider would get 200 miles out of a tank of fuel before needing to top up which isn’t too bad. However, riding, hard, fast or off-road will reduce this range significantly.

While the XRV650 only survived two model years before the XRV750 (RD04) took over.

It was this model that saw major upgrades happen, with an all-new frame and bodywork produced. It also had a lower fuel tank and lower seat.

The new frame combined with the lowered fuel tank meant the bike was better balanced and less top heavy than its predecessors.

For 1996 the last version of the 750 Africa Twin was the RD07A. The main difference was that the cowl and screen were enlarged, other than that it was only minor cosmetic changes such as paint schemes.

This 750 model would remain available until 2003 , when it was pulled from Honda’s line up as it was simply being over-run by bigger and faster competition.
It would be 2016 before Honda re-introduced the Africa Twin CRF1000L.

MCN state “The Honda XRV750 Africa Twin's one of the most reliable bikes you can buy". However, both the XRV650 and XRV750 would encounter some common issues/problems.

Let’s take a look at some of the downsides of the early Africa Twins and what to look out for if you are planning to buy one today.

On the XRV650 their CDI’s would often get damaged as the seat rests on the connection terminals and eventually where they had been soldered, they would break. It is possible to re-solder the internals, by carefully splitting the case.

On the XRV750 there are a few more things that were reported to go wrong in some instances:

●    The steel exhaust was prone to rust if not carefully maintained but it is possible to replace this with a new old stock one or aftermarket exhaust.
●    Like many of Honda’s 90’s bikes the regulator/rectifier was prone to failure. Upgrading this is a common mod that owners make, as the standard kit could destroy electrics, blow bulbs and fuses and even destroy the battery.
●    Carbs on the early editions would sometimes lose fuel so you can replace these with vent tubes and connectors from the later RD07A to avoid this.
●    The Fuel Pump was another common issue so changing this out to a Facet fuel pump will solve this.
●    A broken or choke that sticks is another annoying issue but this is another easy fix by replacing the plastic choke cable retainer with a metal one.
●    The rear shock   did the job well but it can be tired, so is worth replacing.
●    The steel frame is solid but it was prone to surface corrosion and so it is best to keep on top of the maintenance and how you store your bike.
●    There are no real issues with the brakes, except they are weak by modern standards, upgrading to braided lines and new pads will help.

A quick side note it may be worth upgrading the battery to a Gel Cell battery, if you plan on doing some off-roading and riding in all weathers a gel cell battery will give you extra peace of mind that you won’t have any spillage.

Modern batteries are capable of handling more electronics so if you want to fit heated grips or a USB port then a new battery is a must.

Overall, though I tend to agree with MCN, the early Africa Twins are solid machines and are a great choice for those overland tours, taking you wherever you want to go.

What else is there to say? I think the XVR650 and XVR750 remind us that you don’t need an Adventure/Dual Sport motorcycle with all the mod cons to get out and travel the country/the world.

Who needs a full on digital interface, with google maps, weather updates, music, communication systems, rider modern and a computer that stabilises the bike?

Strip things back a little, give me two wheels, throwback 90’s paint work, a bike with some decent ground clearance inspired by the Dakar Rally and I am good to go, quite literally anywhere.

If you require any assistance when ordering a Honda motorbike part(s), contact our parts specialists here or through our online chat support.